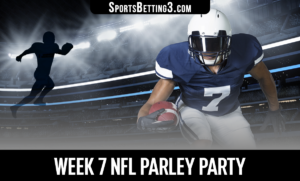 Week 6 of NFL action gave us pride week. As basement dwellers brought a few too many surprises for our liking. The fired coach corollary won again. Thanks to the Falcons reaching deep for whatever semblance of pride they have left. The N.Y Giants also barely got off the winless snide against the Washington Professional football team. Riverboat Ron came up snake eyes and the Lesser Allen looked terrible. Thankfully, we still have the New York Jets and Adam Gase to count on to build our parley party in week 7 of the National Football League.

The New York Jets are Jetsing in the worst way. Adam Gase’s history of battling with high profile players and his dickish tendency to hang players out to dry hasn’t inspired the troops thus far. Joe Flacco was washed years ago and undoubtedly, management has their eye on the most coveted draft prize in recent years: Trevor Lawrence.

The Cardinals looked fantastic against the Cowboys on Monday Night but this week they take on a rested Russell Wilson. Pete Carrol’s also 7-3 coming off bye weeks, taking Seattle’s last four games with an extra week to prepare.

Both teams come into the game with highly ranked defenses, so points will probably be hard to come by in this division rival match up.

The Green Bay Packers had their week from hell as Aaron Rodgers uncharacteristically threw two picks and only his third pick-six of his career. There’s no way this Packer team doesn’t pull itself together against the putrid Houston defense.

Finally, the offensive juggernaut that is the Kansas City Chiefs takes on the Denver Broncos after their feel good win over the New England Patriots.

Cam Newton looked all out of sorts coming off of COVID and the Broncos got the win without scoring a touchdown. They’ll definitely have to hit pay dirt more than a couple times if they hope to have any chance against Patrick Mahomes.

For those who don’t know, teasing two teams in a parley allows you to move the line 6 points but both teams must cover the spread. For example, if you were to tease the Buffalo Bills and Seattle Seahawks together, you would get Buffalo -6.5 and Seattle +2.5.

The four games we selected above are primed for teaser parlays. In whichever combination you choose, we love the value of all these teams with an adjusted line.