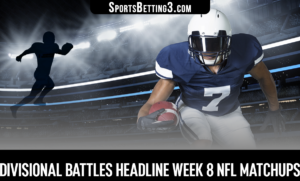 Week 7 saw a few surprises in the league. The Seattle Seahawks got into an absolute shootout against the Cardinals on Sunday night. Kyler Murray looks like one of the future stars of this league. Unfortunately, he is on a bye this week even though he is an absolute must-watch player in this league. Week 8 NFL matchups, breakdowns, and advanced stats below!

All odds are consensus odds across the industry.

This is the game of the week by far. The Ravens have just one loss this season but that one loss was a dominating one against the Chiefs. This is the first game since then that the Ravens have a matchup against a legitimate playoff team.

Sharp bettors have been all over the Steelers in this one. The line originally started +5.5 but bettors have brought it all the way down to +4. I would not be surprised to see the lines move to a field goal either. The Steelers are extremely legitimate and have the 4th best odds to win the Super Bowl.

Another matchup between the Seahawks and NFC West rival is the FOX game of the week. San Francisco has turned their fortunes around since early-season woes. Tevin Coleman could be back shortly but they will be without Raheem Mostert and Deebo Samuel. Can Jimmy Garopollo be able to keep up with some of the best offensive prowess we’ve seen in years? It is asking a lot, lets take a look.

The Seahawks are 1st in the NFL in yards per play at 6.64 yards. They are 2nd in passing yards per game with 295 and the 49ers are missing a large part of their defense. Coming off of a loss, Russell Wilson is one of the best quarterbacks in the NFL. Expect the Seahawks to run away from San Francisco and cover the light spread in this one.

Has anyone fallen off the ladder more than Cam Newton? His arm looked alive and strong earlier in the season. Fast forward just two months and he is being benched for Jarret Stidham. This might not be the end of it either, Cam Newton has not been able to get the ball to any of their main targets. Furthermore, the Patriots offensive weapons are totally non-existent.

Likewise, the Buffalo Bills have not looked great either. They do not play nearly as good of defense as they used to and Devin Singletary has taken a step back this year. This is a tough one to pick in a division battle. However, I would expect the Patriots to have a bounce-back performance in this one. Patriots cover the spread and win outright.