Covid-19, also known as coronavirus, continues to impact millions across the country. Serious public health concerns have left many professional sports leagues on the sidelines. As of writing on June 23, 2020, the NBA and NHL have yet to restart and conclude their 2019-20 seasons. Meanwhile, the MLB has a tentative return date of July 24 if the MLBPA agrees to show up at spring training on July 1. Whether or not fans will see a conclusion to any of these seasons remains to be seen.

The NBA and MLS plan to play in a “bubble,” keeping all players and staff in a centralized location to avoid contracting Covid-19 from outside elements. The NBA has a tentative return date of July 31, while the MLS will return on July 8. Dr. Anthony Fauci has said that the NFL should also adopt a “bubble” format or consider cancelling the 2020 season. Most recently, the NFL Players Association’s medical director has advised that players avoid private workouts with each other after a recent spike of new Covid-19 contractions across the country.

The NFL has already cancelled all international games in 2020. The international schedule in 2020 was set to have four games in London and one in Mexico City.

The regular season kicks off on September 10th, 2020. Will continued Covid-19 spikes threaten this year’s NFL?

Our data is updated daily before 1:00 PM EST. Share this page and come back as the NFL season draws near. Our stats and calculations are explained at the bottom of the page.

Markets figured by SportsBetting3.com staff and subject to change as virus trends update. All odds are money lines. We do not take, place or make bets. These odds are for news and entertainment purposes only.

The first test the NFL must pass is training camp. Training camps are currently set to open on July 28. The league and player’s union are expected to agree on league protocols within the next 30 days, giving teams two weeks to prepare to head to camp. All players and coaches will be tested upon arriving and odds the NFL season is cancelled or postponed will likely move significantly one way or another after receiving initial testing reports.

The thought of NFL players grabbing onto, running into, and tackling each other and not spreading the virus seems naive. The biggest factor is whether or not the NFL can keep infected players off the field. To help accomplish this goal, the NFL plans to test players three times a week for Covid-19.

According to ESPN, a “small number” of Dallas Cowboys and Houston Texans have recently tested positive for Covid-19, including Cowboys star running back Ezekiel Elliot. Whenever positive reports surface, especially for star players such as Elliot, odds the NFL season is cancelled or postponed will likely shift. 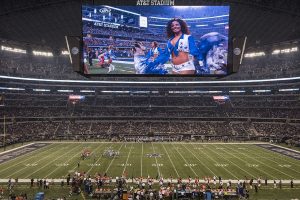 The NFL’s initial Covid-19 contingency plans came out in late April. One of the contingency plans is to start the season five weeks late on October 11. In this scenario, the Super Bowl would be pushed back three weeks and the regular season would be shortened to 14 games per team.

Another contingency plan focused on health in the playoffs. In this plan, there would be a two-week break after conference championship games to allow teams to get healthy. The break before the Super Bowl would be reduced to one week and the Pro Bowl would be cancelled.

As a general contingency plan, if the season is delayed, earlier games can be played after Week 17 and would result in the reshuffling of the playoff schedule. Another accommodation provided by the NFL was to give each Week 2 opponent the same bye week.


Will the NFL Season be Cancelled or Postponed?

The NFL is prepared to play a 14-game regular season if necessary. However, even a shortened season is in serious jeopardy given the physical nature of the sport. So far, Korean baseball has returned to play without any stoppages. The PGA Tour has also returned and has dealt with positive cases on the course without a break in play. Baseball and golf, though, are among the least physical professional sports. Months ago it appeared that the NFL would have plenty of time to get protocols and contingency plans in place. And while the NFL has done everything it can to prepare to play amid a pandemic, the virus is much more active than most thought it would be at this point.

On the optimistic side, every major European soccer league is back in action. Although not as physical as American football, soccer is a sport that includes players running into and grabbing each other for over 90 minutes. There have been no stoppages in play from any of these leagues, so there may be hope for the NFL to return without a postponement or cancellation.

Those interested in betting on whether the NFL season is cancelled or postponed should pay close attention to the returns from the NBA and NHL. Both sports are nearly as physical as football and should provide a blueprint for how the NFL can safely return to play. If those sports have issues finishing their seasons, NFL odds will shift accordingly. Finally, there is also a second wave of Covid-19 to consider. If the virus comes back strong in the fall, the NFL could have little chance of playing a full season.

Count – Latest case total since March 1, 2020.
* %7 Day Chg – We calculated the average daily new cases (ADNC) for the past 7 days and previous 7 day period. Then we found the % difference between each number. Positive (negative) numbers represent an increase (decrease) in the last 7 days compared to the previous 7.
Trend – Any change greater than 10% represents a trend. Changes less than 10% represent no substantial change, or “same” status. Our choice of 10% is subject to revision.