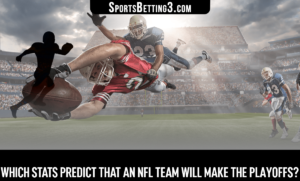 Imagine you could determine which NFL teams would make the playoffs? Such knowledge would produce numerous profitable betting opportunities. Super Bowl and conference futures bets would be easy winners. Luckily, SportsBetting3.com has research which stats predict whether an NFL will team the playoffs.

The following is adapted from a case study featuring the Kansas City Chiefs. For comparison purposes, we also looked at the New England Patriots, San Francisco 49ers, and Indianapolis Colts. The Cleveland Browns, who’ve experience years of failed playoff attempts, were the control team. Dig in below and make some money this NFL season!

Case Study: How the Kansas City Chiefs Made the Playoffs 2003-Present

We reviewed key Kansas City regular season stats for each year they made the playoffs, 2003-present. We also tabulated numbers for the 49ers and Colts.

New England made the playoffs every year except 2008 in our 2003-present sample. Meanwhile, Cleveland has the longest playoff drought in NFL history. They haven’t made the postseason since 2002. Cleveland’s stats from 2003 onward effectively demonstrate how a team does not make the playoffs. The Raiders have a similar track record, save one playoff appearance in 2016.

Each team’s overall averages are displayed below. Separate tables containing each team’s regular season stats follow. Numbers for the Cleveland Browns are provided as a control group.

Kansas City makes the playoffs if their regular season is above their playoff year averages. In our estimation, the most predictive stats are possession time greater than 30 minutes, a 97 QB rating or better, 5700 offensive yards or better, and at least 50 touchdowns.

Note also an average of 327 1st downs in the regular season. Most of the totals cluster closely around 300. The Kansas City Chiefs must consistently advance the ball to win games!

For the record, the New England Patriots’ averages exceed these numbers. That suggests a range of high end performance – well above the lowly Cleveland Browns and Raiders – guarantees a crack at the Super Bowl.