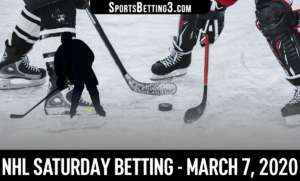 The NHL Saturday betting market this weekend is full of premiere match ups right from the start. With just under a month left in the regular season, teams are more motivated than ever to secure their place in the playoffs. Fatigue comes into play this time of year, and veteran teams that have been there before tend to fare better than younger, more inexperienced teams. Below are the top four NHL games coming up on Saturday, March 7.

Despite having a goal differential (+24) near the top seeds in the Metropolitan division, the Carolina Hurricanes are currently on the outside looking in at the playoff bracket. One of the teams ahead of them in the top wild card spot is the New York Islanders. The Islanders have a fraudulent record according to the advanced metrics, and their +2 goal differential supports that.

Carolina will likely be the underdog with this game coming at New York, but home ice in hockey can sometimes be overrated. This may be a game where the wrong team is favored, and there could be some nice value on the Hurricanes on Saturday.

The Capitals currently sit atop the Metropolitan with 86 points and the #1 seed, but only four points separate Washington from the Penguins at 82 points. Both teams play on Thursday night, but this will be three games in four days for the Capitals, while the Penguins will be playing their third game in five days after beating Ottawa 7-3 on Tuesday.

The Penguins rank 7th in xGF% at 52.79% while the Capitals are further down, ranking 14th at 50.9%. The market looks at these two teams as close to even, so it will be interesting to see what this line opens up at. If the Penguins aren’t too heavy of favorites, there may be some value on Pittsburgh when factoring in rest and travel for Washington. The flip side is that if Washington turns into a big enough underdog, they might present a plus-money line too juicy to pass up.

The Nashville Predators are another quality team currently on the outside looking in at the playoff picture, so they will be desperate for a win against a quality Dallas squad. At 72 points, the Predators sit one point behind the Minnesota Wild, who beat Nashville 3-1 on Tuesday night. And two points behind the two wild card teams, Vancouver and Winnipeg. Dallas is comfortably in the playoff picture with 82 points, and are currently the #3 seed in the Central division.

It will be curious to see where this line opens up at with the Predators needing this game more than the Stars, and being in Nashville, or “Smashville” as they like to call it. Dallas at plus money is interesting, as they clearly appear to be the better team.

The best game of the day comes on Saturday night as the Lightning travel to Boston. Arguably the top two teams in the NHL, Boston currently holds a nine point advantage over Tampa Bay in the standings.

The Lightning at plus money is intriguing here. They need the game more, and their advanced metrics look better than Boston’s.