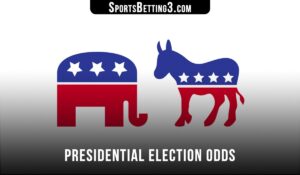 Editor’s Note: It is against US law to bet on election results. The following article contains archival information from the 2020 US election. It will no longer be updated.

The upcoming United States presidential election taking place on Tuesday, November 3, has seen wildly fluctuating odds. The initial numbers released in April showed Donald Trump as a slight favorite of -110 with Joe Biden at +125. But as the world has changed in the months since, odds have changed dramatically in favor of Biden. As of October 12, Joe Biden is a -200 favorite with Trump at +170. However, as Americans well know, the election and its ultimate results are far from a sure thing.

Oddsmakers determine their numbers using a variety of factors. The starting point is typically a roundup of nationally released polls. Regional polling provides data for models which begin projecting how those votes will be reflected in the electoral college. According to FiveThirtyEight, Donald Trump had a 29% chance to win in 2016. When converted to odds, a 71% chance for Clinton would have true odds of -244.

By the time the election came, both candidates were bad values from a betting perspective. Clinton was overvalued at -275, while Trump was also overvalued at +190. According to FiveThirtyEight, Trump’s true odds should have been +244.

While FiveThirtyEight was way off in their projection of the 2016 election, they were more accurate than most. The New York Times tracked models showing Trump’s odds ranging from 15% to less than 1% on election night. So, while these models are highly sophisticated, they can also be highly flawed.

Currently, FiveThirtyEight shows Joe Biden winning in 86 out of 100 simulations. After the first presidential debate, NBC released a new poll that showed Biden at 53% and Trump at 39%. A 14-point gap appears to be insurmountable for Trump this late into the election season. And with this election being vastly different than ever before, many believe that Trump does not have enough time to close the gap. However, it is worth noting that Hillary Clinton had a similar lead in 2016.

On the day of the debate, Biden was listed as a -120 favorite with Trump at even money. The following day, Biden was up to -140 and Trump was listed at +120. Those numbers only continued to move up in the days since. As of the first week of October, Biden was a -175 favorite and Trump at +145 underdog.

How Does Trump’s Bout with COVID Affect the Election?

As far as the odds go, Biden is currently listed at -200 despite Trump’s recent declaration that he had beaten COVID. However, the most recent polls show that Trump has inched up from the 14-point gap reflected in the NBC poll. Of five polls that were completed on October 11, Trump, on average, had narrowed the gap to 11 points.

Pollsters are split on Trump’s recent bout with COVID. Some view his lack of precautions in contracting the virus as a negative, while others see his recovery as a sign of strength given his old age.

How Will Health Affect the Election?

At 77 years old, Joe Biden would be the oldest first-time President of the United States. However, if elected, Donald Trump at 74 would also be the oldest sitting U.S. President. Age is one of the factors Biden has going against him, and Trump’s bounce-back from COVID-19 may further strengthen his position as the healthier of the two candidates.

How Will the Debates Affect the Election?

The first debate was seen as a disaster by most onlookers and neither candidate made a particularly good impression. Trump needed the debate more than Biden did given his lagging performance in the polls.

The second presidential debate was set to take place on October 15. Trump’s bout with COVID-19 necessitated a shift to a virtual debate. Despite Trump’s recovery and desire to debate in person, it has since been canceled. Currently, a third debate is scheduled for October 22.

As for the debate between Mike Pence and Kamala Harris, according to a CNN poll, 59% believed Harris had the better night. The gap was largely a result of female poll takers, with Harris winning 69% to Pence’s 30% in this demographic. Men were more split, with 48% favoring Harris to 46% favoring Pence.

What Factors Can Change the Election?

The most significant factor that can change the election is positive news surrounding COVID-19 and a potential vaccine. President Trump has said that a vaccine will be here sooner than later. He also touted the drug that he was administered during his stay at Walter Reed hospital.

A potential second stimulus package will be another factor that could help Trump pull ahead. Republicans and Democrats are currently still debating what that stimulus package should look like. But if and when the stimulus is announced, it will likely be good news for Trump.

A trickle-down effect from both positive COVID news and a potential stimulus package will have a positive impact on the stock market. Trump has emphasized both his economic policies and recovering equity markets during the campaign. Any increase in the market could increase his chances of victory.

Bob’s Take – Few will admit to pollsters they’re voting for Trump. He’s still within reach of victory. Like 2016, the shy Trump voter will show up on election day. Trump is the better value.

Ron’s Take – Pollsters and bookies have both learned from their dramatic 2016 miss. The numbers, momentum and current events favor Biden. He had a remarkably low bar to clear in the first debate and came off more coherent, though certainly with a few missteps. Smart money takes the favorite.