Betting on soccer can appear to be a daunting task at first glance. With three-way moneylines and strange totals that include fractional points, you may not feel comfortable diving right in. But betting on soccer can be a great way to take in a game. First, though, you’ll need some strategies for how to make the game not only more entertaining, but profitable as well. Here we’ll go over soccer betting strategies to give you an extra sport to add to your betting arsenal and most importantly, pad your bankroll.

With a three-way moneyline there are three different options you can bet on: Team A, Team B, and Draw. The best way to to bet a three-way moneyline is often by finding value on the underdog. Soccer is a hugely popular sport and many fans of the sport are betting on it. When a large amount of public bettors are in the market, it can become easier to find value, sometimes by simply fading the public.

Consider a game between Arsenal and West Ham in the Premier League. Arsenal is a wildly popular team, while West Hmm is more of a bottom feeder. But in soccer, you can sometimes expect the unexpected. Goals can be hard to come by and with less scoring, there can be more variance in the results. Anytime there is additional variance for potential outcomes, the underdog with a big plus-money line becomes much more valuable.

In this scenario of Arsenal vs. West Ham, the odds could look like the following:

At nearly triple your money, West Ham could be an enticing option, especially at home. Home field advantage plays a significant factor in soccer, as each team has unique dimensions for their home fields. This makes the home team much more comfortable on the field and can lead to more effective play than the visiting team.

Anytime you believe the underdog may have value, a smart strategy is to place a portion of your bet on the draw. In the example above, both results pay out significant plus money lines, so betting on both the underdog and the draw is a way to hedge your bet if the underdog can’t quite get the win but manages the tie.

You can also consider this hedge when betting on a short favorite as well.

With a low number of goals being scored per game, draws become much more likely. Games will often end 0-0 or 1-1 and the draw is typically priced as a high plus-money line.

It may not be as much fun to bet the draw, but some teams are much more prone to draws than others. Always check a team’s recent form to see how their latest matches have played out. A team like Wolverhampton Wanderers in the Premier League had 10 wins, 13 draws, and 6 losses on their record in 2019-20. So if you blindly bet the draw in Wolves games that season, you were up big. 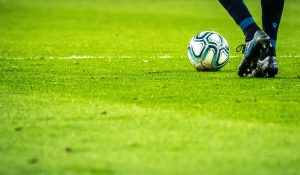 Being successful at betting on soccer has a lot to do with how much information you have and how you interpret that information. But most importantly, as in any betting market, winning at soccer means finding value. The longer you spend reading about soccer and betting on soccer, the easier it will be to identify when a team is being undervalued or overvalued.

Whenever there is a prime time game going on with at least one popular team, you should always consider betting against the public. The sportsbooks know that with popular teams comes lots of public money. So to hedge their own bets they will increase the juice on the favorite and increase the plus-money line on the dog in order to attract bets on the other side. While you are probably more likely to lose the bet on the underdog, over time betting against the public in a highly anticipated game will be a winning strategy.

Soccer is a unique sport that has multiple competitions running at once. A Premier League team may play a league game on Saturday and then play a game in the FA Cup on Tuesday. They may also have a Champions League game on Thursday.

When multiple competitions are going on at once, you need to be aware of which competitions each team prioritizes over the other. A team may hold out a few of its starters on Saturday to prepare them for a game on Tuesday. Motivation also comes into play. An elite team may not be motivated to play in a tournament that is much lower on their priority list.

Above all else, most teams view the Champions League as the highest priority competition. A team will likely be much more motivated to play in a Champions League game than they are in their normal league competitions. To discover which competitions are prioritized over others, you should do your research and read interviews with players and coaches.

A team that has never qualified for the Champions League may also be much more motivated down the stretch of their league year even if they are not in the running for the title. For example, the top four teams in the Premier League qualify for the Champions League. If a team is in fifth place and has never qualified before, they may play with an extra edge for the final games of the season.

To be successful betting on soccer you should be paying attention to lineup construction, recent form, rest, and motivation. When betting on soccer, information is the most valuable asset you can have.