Betting on MMA can be a thrilling experience. But before you start placing bets, it’s best to first gain a full understanding of the various fighting styles involved and the betting options available. Some fighters prove to be much more likely to win a match due to their mastery of a certain style and how it matches up against their opponent.

Two of the most popular ways to bet on MMA are using standard moneylines and totals. The total in MMA represents how many rounds a fight goes. Many fights can be over in a matter of seconds. Bookmakers will set a number, such as 2.5, for the amount of rounds in a total bet. If the fight goes past two round, the OVER would hit.

Moneylines work just as they do in every other sport. For an example of MMA moneyline odds on a UFC fight let’s look at Conor McGregor vs. Nate Diaz in 2016. McGregor was a massive -400 favorite going into the match against Diaz who a +330 underdog. If you wanted to bet on Conor, you would have to bet $400 to win $100. If you were to place a $100 bet on Diaz, you would have won $330 from his upset victory.

How to Handicap MMA

Most fighters will blend different styles together, which can make for a more interesting analysis of a fight.

Fighters that specialize in wrestling have won the majority of fights since UFC started awarding titles to fighters in the late 1990s, accounting for 28 titles in total. The next most successful fighting style has been Brazilian Jiu-Jitsu with 17 titles. Boxing comes in third with 12 titles, while kickboxing, karate, taekwondo and Muay Thai all have under 10 titles.

Wresting has been the most successful style for winning titles because it can be difficult for fighters that are primarily strikers to defend against a master wrestler once they’ve been brought to the ground. Of course, a master striker may also be able to knock out his opponent before the fight ever gets to the ground.

Here are some of the most common MMA metrics:

Most of these stats are self-explanatory, but the metric “passes” is not something many casual viewers may initially understand. In the world of MMA there is a phrase called “passing the guard.” Passing the guard means getting past the opponent’s main defense in order to move yourself into a more dominant position. After successfully completing a pass, a fighter may attain a knee on stomach, side mount, or full mount on their opponent. The far and away leader in MMA passes is Georges St-Pierre, a middleweight fighter with just two losses on his record. St-Pierre has a total of 119 passes, with the next closest fighter at 87.

A fighter’s reach is also a key number to know when handicapping MMA. Reach represents how far a striker can reach out to hit their opponent. 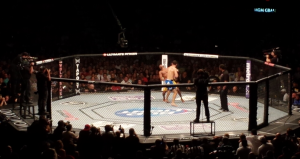 When to Bet the Moneyline in MMA

The best time to bet the moneyline in MMA is to find an underdog that you believe is being mispriced in the market. For an example of when to bet a moneyline, look no further than the example above when Nate Diaz took down Conor McGregor as more than a +300 underdog. While McGregor was favored for a reason, his price of -400 provided zero betting value. And if you compared the two fighter’s styles, you may have come away with the impression that Diaz had a reasonable chance of winning the fight.

McGregor is a striker primarily, while Diaz is a master at Brazilian Jiu-Jitsu, which involves more grappling, ground fighting, and submission holds. When two fighters have such contrasting styles, it becomes more likely that an upset can occur. McGregor needed to knock Diaz out if he wanted to win the fight. But Diaz was able to get him on the ground, and then it became game over.

Another example is UFC 162 which pitted the decorated fighter Anderson Silva against Chris Weidman. Silva took most of the money, pushing the line on him to -295 while Weidman’s odds went to +180. Betting contrarian is usually a sound way to have a winning record of wagers, and it would have rewarded $100 bettors with $180 if they had seen this upset coming. Silva was well past his prime at 37 when the fight took place, while Weidman was just 28. This is also another example of betting against the more popular fighter that takes a larger handle of bets, which provides more value on the underdog.

When to Bet the Round Total in MMA

The round total is often set at 2.5 rounds, as it was in UFC 229 which featured McGregor vs. Khabib. Look at fighter’s previous fights to get an idea of how many rounds they go. Heading into this fight, five of Khabib’s last seven matches had gone to the card for decision victories. This was also a matchup of two quality opponents, which would further suggest the OVER may be a sound bet. When two fighters are evenly matched, the match is much more likely to go over the total.

With the variety of styles fighters can mix and match together, betting on MMA can be unpredictable. Being successful is all about having as much information as possible before placing a bet. Research each fighter’s strengths and weaknesses and how they match up against each other. Consider recent form, age, and public bias and how they can have an effect on the odds. If a fighter like Khabib is frequently going the distance, consider taking the OVER on the round total bet.

The final piece of advice here is to watch as many matches as you can. By watching the matches you will see how different styles play out against each other. You’ll become more familiar with the fighters, the terminology and the most successful styles of fighting.