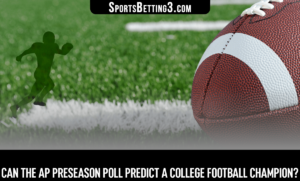 Adapted from our 2019 Case Study: Can AP Preseason Rankings Predict a National Champion?

The following insights will be helpful for college football futures bettors. Payouts are usually higher before a season begins because sportsbooks don’t have enough data to handicap each team. Strong teams losing the first 1-2 games will also get underdog status until they start winning again.

14.29% of preseason teams ranked #1 eventually won the National Championship. Choosing the #1 team is a bad bet. It’s only happened 3 times since 1998!

But 52.38% of teams ranked #3 or #4 or higher did win. That’s a coin flip. Still a risky bet by some measures.
A better bet? 65% of preseason teams ranked 5 or higher went on to win. Now probability is on the future bettor’s side.

Let’s dig into each rank’s performance. Some ranks perform better than others. Eliminating poor performers potentially decreases the cost of our future bet.

Notice #2 teams win more than double the times a #1 wins. Bad news for any #1 and good news for this season’s #2. Interestingly #5 teams have won as much as #1 teams.

Does that mean the #4 team should be removed from our 5 team futures bet? It’s not a bad idea. You’ll save money paying only for 4 teams. Check each team’s historical performance before marching off to your bookie:

Clemson has the best record of all top 5 teams between 1998-2019, winning the National Championship 66.67% of the time. Keep a top 5 Clemson team in your futures bet!

Alabama and Miami (FL) have won 45% and 25% of the time respectively. Florida and LSU have each won once in their 6 top 5 preseason rankings appearances. These teams are less reliable.

The AP ranked the Oklahoma Sooners 10 times in the preseason top 5 between 1998-2019. Each time they failed to win the National Championship. Michigan and Oregon both appeared 4 times and never won, either. Georgia, Tennessee and Nebraska each failed 3 times. Nebraska last won in 1997. Tennessee won in 1998 ranked #10 in the preseason.

What does this mean for the 2019-20 National Championship? Which teams are investment-grade contenders?
The following table summarizes our conclusions using the statistical trends identified above.

Our basic analysis leads to at least one important conclusion: don’t exclude Alabama! Here are some possible college football national championship future bets for the 2019-2020 season:

1. Clemson, Alabama, Georgia & Ohio State – Drop unlucky #4 Oklahoma. The Sooners have only been ranked top 5 once and have never won the National Championship when ranked top 5 in the preseason between 1998-2019.

2. Clemson, Alabama & Ohio State – Drop Georgia and Oklahoma. See above #1 why Oklahoma isn’t worth a bet. Georgia hasn’t won a championship despite 3 preseason top 5 appearances between 1998-2019. Also, only 4.76% of teams ranked #3 have won a title.

3. Clemson & Alabama – 47.62% of teams ranked 2 or higher have won the National Championship between 1998-2019. Clemson and Alabama have the best historical records of top 5 teams. Buyer beware: odds are less than a coin flip.

Is this bet worth it?

Is the expected value of these bets positive? Not based on historical trends.

A 4-teamer with a 65% probability is still risky (#1). Remember, you must divide your wager among 4 teams such that you make a profit if any of them wins. Try playing with an arbitrage calculator. You’ll get a rough idea about how much to bet on each team.

Don’t use arbitrage unless you cover all possibilities

Caution: Arbitrage assumes a fixed number of possibilities. In this case, there are more than 4 teams that could win. These 4 are only the most probable. There’s a 35% chance any other team wins. That means you would lose your entire investment.

If one of the 4 wins, you’ll make a small percentage gain. But if none win you’ll lose 100% of your investment. Futures bets are generally risky unless you can find arbitrage opportunities among small sets of teams, like NFL division futures. Read more here.