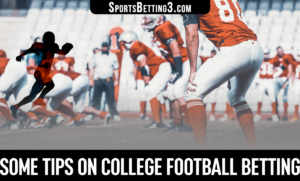 There are few things as exhilarating and maddening as betting on college football.

It is an endurance test for the bettor. Depending on location, games can start at breakfast and carry all the way into the witching hour, when #Pac12AfterDark occasionally brings out the bizarre. It is one of the few instances where kegs and eggs is still socially acceptable. College football provokes far more irrational fan reaction than the NFL because of personal school ties and a greater unpredictability.

This is not surprising considering bettors are tying picks to a bunch of 18 to 23-year-olds, whose successes and failures can sometimes be canceled out in a matter of plays. Add the discrepancy of talent the deeper a team goes on its depth chart, and betting on college football is sometimes a harrowing experience. The phrase “bad beat” is now part of the college football lexicon because some of the more unusual endings have not determined outcomes of games but instead swung fortunes on picks.

So without further ado, here are some tips for surviving Saturdays, and perhaps having a little fun as well.

The most important tip of them all

Do Not bet beyond your financial means! What holds true for the NFL also holds true for college football: If you make bets on a budget, stay within that budget. College football often has wider talent discrepancies than the NFL, which makes picking games on a whim more challenging. Just because Oregon is rocking the latest Nike creation for its uniforms does not make the Ducks 10 points better outside Eugene.

Do seek out first-half betting lines for the top teams

Call this the “Alabama rule,” because the Crimson Tide have been so dominant at times in recent seasons their starters rarely play full games. While the outcome is never in doubt, watching Alabama’s fourth-stringers and walk-ons play the entire fourth quarter is not conducive to Nick Saban’s team covering 35 and 40-point spreads.

And Saban does not care about your picks.

Instead, examine first-half spreads and over/under totals, which are usually more favorable considering the starters are almost guaranteed to play the entire first half against a more manageable spread and total. This holds true for elite programs when playing a conference lightweight or overmatched FCS opponent in a buy game.

Do seek out student media for more information

Player media availability varies widely from school to school, and school media outlets sometimes go in different directions with story angles compared to newspaper beat writers. Thus, you may find a nugget or two of information that could influence your pick.

Do get in on some MACtion

The Mid-American Conference has made a name for itself by thinking outside the box in terms of drawing attention. The MAC often gets the ball rolling with mid-week games, and every so often a team cracks the AP Top 25 and garners national attention. Finding the right matchups could get your week off to a positive start and take pressure off your weekend ones.

Do not back the dregs of a Power 5 conference

The flip side of the “Alabama rule” would be the “Rutgers rule.” There are a select few “elite” college football programs that are little more than black holes of misery that produce losing season after losing season in conference play. Vanderbilt is often that team in the SEC. It now rotates to a degree in the ACC, Big 12, and Pac-12. Northwestern used to be that team in the Big Ten, but it has since passed the baton to Rutgers.

Aside from a brief national rise to prominence under Greg Schiano, the Scarlet Knights have been one of the laughingstocks of the FBS, and their move to the Big Ten in 2014 has not helped. Rutgers is 7-37 (.159) since joining the Big Ten, and 16 of those losses have been by 30 or more points. The sooner you identify the worst team in a conference, the better, because unlike the NFL, these teams are rarely “due to win one.”

This tip is for December and January, when there will be at least one college football game played every day from Dec. 20 to Jan. 4. Coaching changes always happen, and more often than not, the coach leaving his program does so immediately to hit the ground running at his new job.

The newer phenomenon is players sitting out bowl games to ensure they do not suffer a career-altering injury if they have NFL ambitions. This has the ability to severely impact betting lines and change outcomes of games. Last year alone, there were nine high-profile players who sat out their school’s bowl games. Of the nine, five were among the top 20 selections in the NFL Draft. A sixth — Dexter Lawrence — did not play in Clemson’s CFP games after testing positive for a PED.